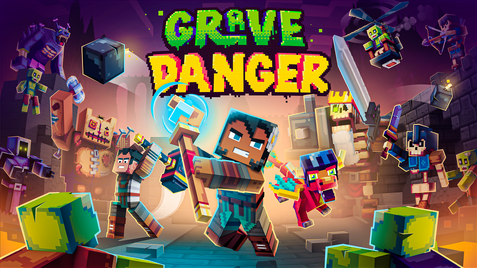 Grave Danger is a tower defense with a twist as the player does not place towers but traps to fend of the waves, while the player can also fend off the zombies directly by attacking them together with you dragon companion. There are 24 unique levels to play through ramping up the difficulty by spawning more and more different types of foes. To boost their defenses players can unlock more powerful traps and weapons.

The player has the choice between 4 different difficulties: Easy, Medium, Hard, Insanity. The player loses the game if they die in Insanity-mode while in the other difficulties they respawn at the starting point of the level.

The player can also choose to play certain levels they have unlocked and add an infinity mode.

While the King is celebrating his birthday party the hero and Piper stand guard at the south gate after loosing a round of Rock-Paper-Scissor against their rival Gary.  As Piper is complaining that the lost yet another round against Gary the two spot a horde of zombies attacking the castle. They jump to action and defend the castle holding of the foe so that the citizens can evacuate. The attack on the castle climaxes with the hero and Piper holding their last stand in the throne room.

The player can choose to play with either Maggy or Jonah.

Traps are used to defend against the zombies. You summon the traps by spending Mana. At the start of each level, you get a set amount of Mana, and you gain more by defeating Zombies.

All music is available on Spotify.

If Jonah and Maggy would plan the perfect day off, it would start with watching the sunrise from The Courtyard. Next up would be training with the Paladins and Archers. To cooldown they would stand guard at The South Gate and finally play many games with Piper and everyone else who wants to join them.

Dragon
Piper: Piper is a tiny dragon born into a long lineage of dragons that has always served the kingdom. One of the ancestors was the inspiration of one of the traps the Knight Brigade uses for the defense of the castle. Piper is the best friend of Jonah and Maggy and its favorite activities are teasing both, eating cake, and bathing in lava. Unlike Jonah and Maggy the little dragon thought it would be all right to sleep through class in preparation for the Knight Brigade. Piper does not really like stairs and standing guard, especially if there is a party going on where one could get cake.

Piper’s perfect day off would start with a hot lava bath down in the dungeon while being served magma cake by Gary. After that, Piper would play a round of hide and seek in The Storage together with Maggy and Jonah followed by lazing around in The Treasury while pretending that all the gold was its own. The day would end by dancing the night away and even more cake.

Human
King: The King just wants to celebrate the best birthday party ever. He is a middle-aged joyful man with a little weight around is belly. He enjoys being in the company of many people, especially his sister Clarice, the Necromancer. He even ordered her favorite punch so she would enjoy the party as well.

One could think that as King every day would be a day off but that is not true. The King must sit in many meetings which are often long and boring. If the king could just take the day off, he would still spend most of it in The Throne Room because the throne is the most comfortable chair in the whole castle. The King would choose his favorite pair of slippers but would probably change them since he likes every pair he has. In the evening, the King would watch an acrobatic performance together with his sister Clarice.

Necromancer (Clarice): The Necromancer is the sister of the King. She lives in the castle on the other side of the river which she inherited from her

uncle. She is so disappointed in her brother not inviting her, that she starts a zombie invasion.

Necromancy has always been a secret hobby for her since as a princess she always had to be elegant and was lonely because her brother had to learn so much to be prepared to be king. So, she raised a few zombies to play with.

Clarice's perfect day off would start with walking her dog Mr. Snuggles in the morning. After that, she would race the Zombiecopters and Undead Hounds around her castle and then spend the rest of the day together with the King and the Skeleton King drinking fruit punch.

Human, Undead
Skeleton King (Uncle Ben): The Skeleton King is the now undead uncle of the Necromancer and the King. He is a party animal and really happy that Clarice is taking him with her to the king’s birthday party. Uncle Ben was the owner of the castle on the other side of the river and gave it to his niece when he died. She was so thankful that she resurrected Uncle Ben to spend more time with him.

If Skeleton King would have the perfect day, it would start with a breakdancing session followed by some Latin and ballroom dancing. To wash off the sweat Uncle Ben would take a bath in the river. For the evening there would be two options and the Skeleton King would decide spontaneously which to take. The first option would be watching a ballet performance while the other would be attending a rock concert.

Human
Gary: Gary is part of the Knight Brigade and Jonah and Maggy’s rival. He often tricks them into doing his job by challenging them to games he will always win. His favorite is Rock-Paper-Scissors since Gary knows that Jonah and Maggy always take rock. Gary is a scaredy-cat and lost the invitation for Clarice because he got scared of her dog, Mr. Snuggles.

Gary’s perfect day off would start with sleeping in. Next would be planning which tasks to give to Jonah and Maggy by beating them in all kinds of games by cheating if he has to. After that, Gary would eat a snack and have hot chocolate followed by a nap. To finish off the day Gary would laze around even more and go to bed early.

Officer: The officer oversees the evacuation. He gives useful advice and reminders to Maggy and Jonah.

The perfect day off for the officer does not exist as he prefers doing his job over anything else. So, the perfect day at work would be a calm day on which everyone does their tasks without whining and there are no events out of the norm.

Community content is available under CC-BY-SA unless otherwise noted.
Advertisement